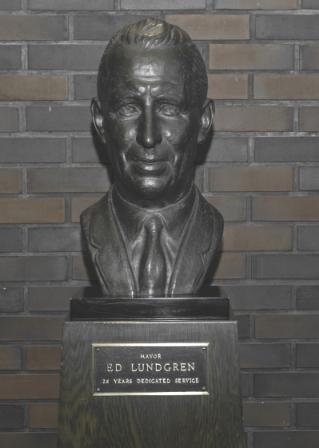 June 1, 1962 when Ed Lundgren, left the Aberdeen council chambers, winding down fourteen and one half years as mayor of the City of Aberdeen, he took his gavel with him. But something new had been added. The gavel had been enhanced by a gold band bearing the inscription “Mayor Ed Lundgren in appreciation for twenty years of faithful service to the City of Aberdeen”. The presentation was a complete surprise to the mayor, who began searching his desk for the gavel in order to call the council session to order. City Comptroller Victor Lindberg then handed over the gavel. Lundgren, visibly moved, read the inscription, thanked his friends and called the meeting to order.
Labels: Sculpture
The official website of the Aberdeen Art and Music Community, the creative district of Aberdeen, Washington.