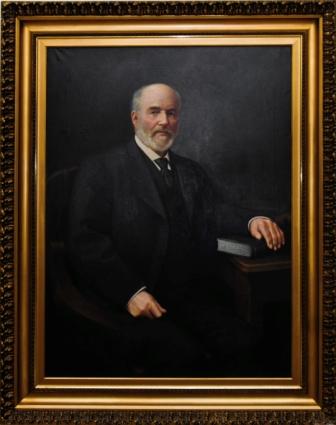 Sam Benn (1832-1935) grew up in New York city and as a young adult worked as a carpenter. For over ninety years, this oil painting of Samuel Benn has kept watch on the elected officials who overseen the city of his founding: a silent observer of countless budget battles, zoning wars and a long parade of passing city employees and council members.

The origins of the painting are found at a meeting of local businessmen in the First Methodist Church in March of 1918. Pioneer merchant George Wolff asked his fellow capitalists to look beyond their personal accumulation of wealth. He suggested they consider the need for things of taste and sophistication and and the need to benefit the local people and accordingly lift up Aberdeen as a place of culture.

They proposed a “Pioneer Building” be erected for the exhibition of “good” paintings, sculptures and artifacts relating to and honoring the pioneers who had settled the area. Immediately a number of Aberdeen’s leading citizens pledged donations of money and materials to the cause. Thomas Benn Dyer, Sam Benn’s nephew and a talented artist, offered a number of his local paintings as a free gift to Aberdeen. One of these depicts Samuel Benn’s cabin near the Wishkah River and can today be seen at the Aberdeen Museum of History.

The first of the pioneer portraits was the forty five and one half by thirty three and one half oil painting of Samuel Benn seated in an armchair next to a small table. To create the portrait, Benn’s children commissioned a talented photographer and oil artist from Portland, Oregon named E.W. Moore. Moore had painted the official portraits of most of Oregon’s governors and at one time operated the city’s largest art gallery.

Moore arrived in Hoquiam at the start of the year 1918 and resided with his brother O.B. Moore, before moving to the Weatherwax-Douglas building, next to the Electric Building on Heron Street. He opened a photo studio and portrait gallery. After several sittings the painting was declared completed.

It was hailed by Benn’s friends and fellow pioneers to be a faithful likeness of the 85 year-old founder of Aberdeen. On May 28, 1919 the portrait was officially presented to the Aberdeen City Council by the Benn family. The date marked the 51st anniversary of Sam Benn’s arrival at the muddy, timbered realm where he would build a city.

The plans for the pioneer gallery building faded and it would be over 60 years before the city had an official site to exhibit pioneer artifacts. And one city hall was replaced by another and generations of city leaders passed in blur through the chambers – but the portrait always maintained its place at the seat of Aberdeen city government. Earlier this year the assembly chambers were renovated and Benn’s lively eyes and full beard now greet the public from the hallway, fittingly near a showcase of historic artifacts relating to the city’s past. The $500 oil painting gifted by his children is a priceless tribute to the pioneering founder, builder and chief promoter of this fair city.
Labels: Sculpture
The official website of the Aberdeen Art and Music Community, the creative district of Aberdeen, Washington.