Teddy and The Captain 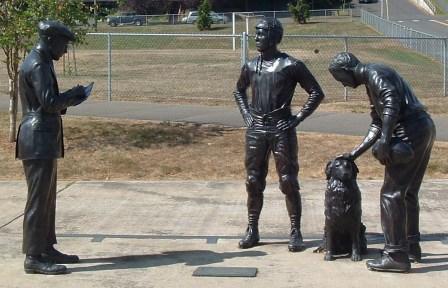 “Teddy and the Captain” by Larry and Caplan Anderson – Bronze Sculpture

Irvin Pinckney (Class of 1916) was the outstanding player and captain of the 1915 Aberdeen High School football team. He was further honored as All-Northwest Halfback by unanimous vote. Here Pinckney is being interviewed by Aberdeen Daily World cub reporter Russell Mack (Class of 1912), after the final game of another winning season. Don Hawley (coach 1913 – 1916) holds the game ball as he pets Pinckney’s faithful dog “Teddy”, the team’s informal mascot.

Donated by:
Dr. Bernard Pinckney, DVM (Class of 1938)
Mardell Coldiron (Hoquiam Class of 1941)
In honor of their father, Irvin Pinckney
Labels: Sculpture
The official website of the Aberdeen Art and Music Community, the creative district of Aberdeen, Washington.