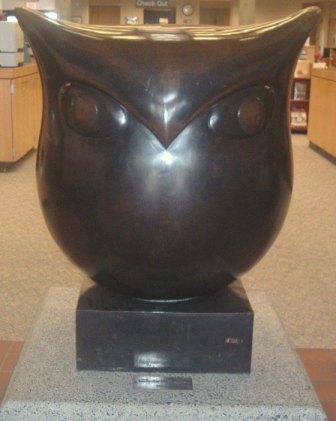 Everyone loves THE OWL, and over the past four decades thousands of patrons have patted it on the head as they have entered and departed our library.

The artist who conceived this wonderful creaiton was Beniamino Bufano, an eccentric small man who was born October 14, 1889 in San Fele, Italy. Benny was one of 16 children, and came to New York with his family when he was three years old. As a young man, he served apprenticeships with various artists, and it was clearly evident that he possessed a special gift.

Prior to WWI, Bufano returned to Italy where he carved an eighteen foot, two and one-half ton granite statue of St Francis of Assisi. That piece has been described by British art critic Roger Fry as “the most significant piece of sculpture done within the past 500 years.” It was ultimately brought to the United States and gifted by the artist to the city of San Francisco, Bufano’s adopted home.

Money had little meaning to Bufano except for what he required to purchases more art supplies. He had a multi-faceted personality, and those who knew him described him as warm, shy and unassuming; but also aggressive and outspoken. He stood somewhere between four foot ten and five foot three. On a heavy day, he weighed in at one hundred ten pounds. Numbers are never clear when referring to Bufano. He was a vegetarian who fasted one day each week; and he was a pacifist of the first order.

His favorite subjects for his sculptures were peace themes: children, animals and St Francis, the 13th century monk whom he sculpted more than one hundred and fifty times. In Bufano’s eyes, St. Francis was the embodiment of peace and love of humanity.

Following the assassination of Senator Robert Kennedy, Benny Bufano and San Francisco Mayor Joseph Alioto sent out a plea for Californians to turn in their guns. More than two thousand weapons were voluntarily submitted and melted down. The gun metal was then combined with bronze and a giant figure of St. Francis was formed. It was emblazoned with colored mosaic depicting Bobby Kennedy, Martin Luther King Jr. and Presidents Kennedy and Lincoln. A singing chorus of children of all races are shown at the base of Bufano’s twelve foot sculpture.

Bufano was the first sculptor to work with stainless steel, and among his most noteworthy pieces is his statue called PEACE, which stood at the entrance to the San Francisco airport. Many of his pieces, unlike our owl, have spent transient existences; being moved from place to place, depending on the whims of those in political or artistic power. His works were both maligned and highly praised.

Benny Bufano’s art can be seen in many public places throughout America, particularly in the Bay area and northern California. His famous seals, bears and other animals reside at Golden Gate Park, Aquatic Park, and Ghirardelli Square. a mother bear and her cub greet visitors to Portland’s Washington Park Zoo. His work can also be found in New York’s Metropolitan Museum of Art and the Museum of Modern Art, as well as in Paris, Rome, London, Vienna, Madrid, Moscow, Berlin, Peking, and Tokyo.

Benny traveled the world and counted among his acquaintances Mahatma Gandhi, with whom he made the Salt March (www.saltmarch.org) Gandhi and his followers set off on a two hundred mile journey from Ashram Ahmedabad to the Arabian Ocean.

Bufano argued Marxism with Mao Tse-tung, discussed philosophy with Albert Einstein, and shared a pizza with Franklin Delano Roosevelt. His close friends included William Saroyan, Henry Miller, Ansel Adams, ‘Trader Vic’ Bergeron, and Melvin Beli. Bufano had a brief marriage and had one son, Erskine. Fortunately he also had a group of patrons in the Bay area, and they attempted to see to his bodily needs. Beniamino Bufano was round dead in his San Francisco studio in mid August, 1970. At the time of his death of an apparent heart attack, there were over six hundred pieces of his sculpture in storage.

A small group of Aberdeen citizens who were committed to the Friends of the Aberdeen Library began talking about the possibility of acquiring a piece of art for our building. Bob and Liz Preble spearheaded the search, and then serendipity came into the picture. Bob Street was the architect for our newly built library, and he had had a young man working for him, Gary Hanson, who had moved on to the San Francisco area. Gary’s new employer happened to be one of Bufano’s patrons. Gary suggested that the Prebles seek out Bufano, and since the Prebles had a son in college in California, they visited Bufano at his studio. They were drawn to the wise old owl, Bufano approved of the acquisition, and thus the Prebles and their group of ten or twelve couples covered the cost of the sculpture. The three hundred pound bronze owl rode north to Aberdeen in the back of Gary Hanson’s station wagon. It arrived in early June, 1968 and sat in the Prebles’ home until the dedication date at the library on July 3, 1968.

Benny Bufano agreed to be present at the dedication, so he arrived in Portland where Jim Ingram met him and flew him to Aberdeen in his small plane. Bufano was delighted! He had traveled the world, he had worked alongside coolies on the Chinese docks, he had slept at the White House; but he had never flown in a small plane. While in Aberdeen, Bufano was a houseguest of the Prebles, and they hosted a reception for him and the donors who had purchased the owl.

There were fifty onlookers that summer afternoon waiting… and waiting…and waiting for the Prebles to arrive at the dedication ceremony with Bufano. Mayor Ed Lundgren was there. Head Librarian Rosalie Spellman was there. But where was the honored guest? The Prebles had taken him to the Dunes Restaurant in Grayland for lunch and then drove him to the beach; where in an all-too-typical Grays Harbor fashion they proceeded to get their car stuck in the sand. A wrecker saved the day, and the trio was only a half hour late to the festivities.

There was loud applause and warm approval when Bob Preble unveiled The Owl that sunny July day while its’ diminutive creator looked on. Our Owl was the first piece of Bufano sculpture to be dedicated in the Pacific Northwest. The statue had been placed on a concrete pedestal. It is interesting to note that not one of Bufano’s many hundreds upon hundreds of other statues or mosaics is signed.

Our Owl is characteristic of Bufano’s work. Simplicity was his trademark. He formed only enough features so that the viewer could recognize the subject. Bufano’s own definition of a good statue was the same as that of Michelangelo: a good statue can be rolled downhill and emerge intact. Our Owl qualifies. Bufano’s creations were intended for the masses, not for private collections, and they were made to be touched. Bufano did not declare his work complete until he stroked it with his eyes closed. If it felt right, he laid down his tools. Again, our Owl qualifies.

As you visit our library, pause for a moment and smile at our Owl. Close your eyes for a few seconds while you pat him on the head and run your hand down his sides. He truly does belong to the masses, and he is begging to be touched.
Labels: Sculpture
The official website of the Aberdeen Art and Music Community, the creative district of Aberdeen, Washington.