The Howl roosts in old-growth cedars and sings in three-part harmony. If not spotted in its night roost, you may find Howl at a day-time haunt at the Hoquiam Department of Licensing on Sumner Avenue. It’s where all the the birds hang out! 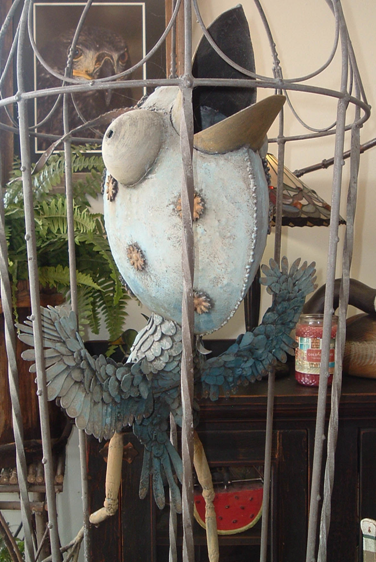 The Exululo maculosus, commonly known as the Spotted Howl, is a rare and endangered species found only in Grays Harbor. Up until the late 1910s, the forlorn chorus of the Spotted Howl was a common sound throughout the Harbor. On clear, moonlit nights the Howls would often gather into small flocks and fly from their roosts in the tidal wetlands to the top of old-growth cedars where they would howl at the moon in three-part harmony. In 1919 a local millwright discovered that the Howl tasted almost exactly like turkey. Shortly thereafter a local franchise of Colonel Slanders’ Kentucky Fried Turkey opened in Aberdeen and the number of Howls began to steadily decrease.

Within a four-year period, over-hunting had decimated the Spotted Howl flock to the point that Colonel Slanders had to switch to chicken. On July 3, 1927, a true ecological disaster occurred: the Howls were happily serenading the moon when suddenly a full lunar eclipse occurred. The Howls suddenly became quiet, took off in single-formation flight toward the harbor, and committed mass suicide by diving headfirst into the mudflats. The only howls left were the young who could not yet fly, most of which fell victim to the elements. Fortunately, a number of the young howls were rescued and raised as a science fair project by Ms. Sara Beesley’s third-grade class. A small number were released into the wild, and their numbers have slowly increased; there are now at least 31 Spotted Howls on the Harbor.
The official website of the Aberdeen Art and Music Community, the creative district of Aberdeen, Washington.